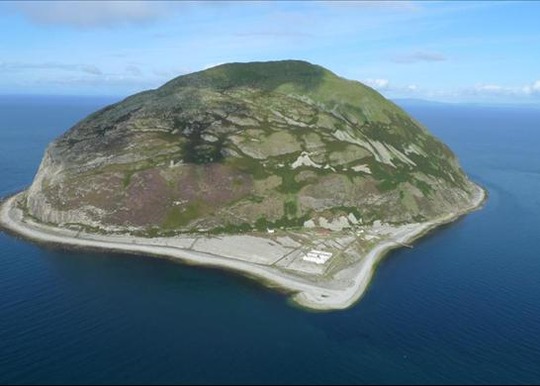 Out of respect for the principal parties involved in the triumvirate, but separate ownership of the three main elements of Ailsa Craig Island …

… this website – Lighthouses For Sale – will now be reviewing the sale position of these elements on distinct and separate basis.

For clarity, the three elements on Ailsa Craig Island that currently have three separate owners will each have a new dedicated webpage on this website. Primarily to avoid confusion between the different land titles/buildings that ARE for sale, and those, at this time that are NOT for sale.

As the former owner of one of these parts of Ailsa Craig Island, I would recommend anyone with an interest – stakeholders, island visitors, prospective bidders, would be lighthouse building owners etc., to revisit this page and the two other Ailsa Craig pages during the course of April 2014. By the end of this month all three pages relating to Ailsa Craig will have been completely rewritten. Plus a lot of new, and pertinent information made available.

Unique Property Bulletin is a not-for-profit website run by volunteers. We aim to help folk who love living in unusual buildings find their ideal idyll. This publication started in 1992 and went online in 2012. In 2017 we commenced a new project aimed at making this website free, for everyone, forever. That involved buying a lighthouse station. More news on this specific adventure in due course. For now, if you need us to help you, please TEXT: 0757-2768-795.

Fancy a new vocation in 2020 with potential to grow into a significant income source? Unique Property Bulletin Ltd., is looking for contract contributors starting at £3,650. Enjoy blogging from the comfort of your own home. We need someone with writing skills and an eye for unusual property. Applicants must be fully conversant with WordPress operating systems. The contract is to add a unique property for sale to this website every alternate day. Are you interested? PLEASE CLICK ON THE PHOTO ABOVE for more information.

Unique Property Bulletin will testing out a new section soon: UNIQUE PROPERTY OVERSEAS. The Unique Property Bulletin embraces unusual property and situations. For example, Brexit will be a challenge whatever happens. But we are sure UK citizens will still visit Europe + America + the rest of the world and vice versa after Brexit. Life is far too short to wait until politicians make up their minds. Folk still want to go to Europe and America on holiday + to work + to live, and again: vice versa. So here is the first in what we aim to be a significant development in the history of our publication. Part of Unique Property Bulletin is gently headed overseas. Our first offering: CLICK ON THE DUTCH HOUSEBOAT PHOTO ABOVE to start this journey.

ESCAPE FROM BREXIT! A bespoke solution personalised for our readers… For British folk looking to protect their PERSONAL rights to live + work in both the UK & EU after Brexit we might have a way. The Unique Property Bulletin Feature article aims to give you COMFORT in illustrating obscure but important law on this. But first, UK residents looking to preserve their personal ability to live and work in the EU will need to locate a home in an EU country. SOON. So in an effort to help our readers passed the oversaturated topic of Brexit and back to normality, we are including a FEW EU unique properties. CLICK ON THE DUTCH HOUSEBOAT PHOTO ABOVE to start this journey.

To read about this amazing, almost invisible, Mirror Cube Tree House - also known as the Mirror Tree Hotel that looks like a UFO in a Swedish Forest, and soon to be featured on George Clarke's Amazing Spaces Television series please CLICK ON THE PHOTO ABOVE.

For Sale: UKWMO Underground Bunker. Guide: £25,000. Located close to, Brundall, Norwich, Norfolk. PLEASE CLICK ON THE PHOTO ABOVE FOR DETAILS.

420 year old house for sale. Craftsman built, 3 bedroom, 3 storey Tudor House in Tewkesbury for sale. Guided at £175,000. To find out more about this building plot, please CLICK ON THE PHOTO ABOVE.

This 2 bed flat on the Isle of Wight was formerly an old, closed hospital. Now, after a fine renovation, one of the flats is for sale. This has a lovely balcony into the bargain. To read the online details and also see further photographs, please CLICK ON THE CHURCH PHOTOGRAPH ABOVE.

Building Plot For Sale: 4 Bedroom Detached House. Reduced Price: £29,500. The photograph above shows the beautiful seaview from this coastal BUILDING PLOT. It also has OUTLINE planning permission for a detached house. Ideal for your own UNIQUE design. Now with the NEW road + related infrastructure built and just awaiting the top-layer of final tarmacadam. To find out more about this building plot, please CLICK ON THE PHOTO ABOVE.

Riverside Home & Business For Sale. To read about this unique home and unique workplace at Rudders Boatyard, Badger Cottage and Burton Cliff please CLICK ON THE PHOTO ABOVE.

Former brewery building for sale. Located in Hertfordshire. To read the online details and also see further photographs with floorplans, please CLICK ON THE PHOTO ABOVE. NOW SOLD - To read about the earlier details of this house converted from a former Engine Room within the original Lighthouse Complex at Strathy Point PLEASE CLICK ON THE PHOTO ABOVE. Archived details via this link. A former lighthouse TOWER has been converted into a very popular, 3 bedroom, holiday letting property. SOLD SOLD SOLD. To read the online details and also see further photographs, please CLICK ON THE LIGHTHOUSE PHOTOGRAPH ABOVE.

This DETACHED church with FULL PLANNING PERMISSION to a 5 bedroom house is for sale. Guided at £63,000. NOW SOLD. To study ARCHIVED details, please CLICK ON THE PHOTO ABOVE

NOW SOLD - More like this needed. To read more details about this former Lighthouse Keepers' Cottages at Douglas on the Isle of Man, please CLICK ON THE PHOTO ABOVE to read ARCHIVED details.

ROC Nuclear Bunker: UKWMO Penshurst At SEVENOAKS, Near London, NOW SOLD - MORE LIKE THIS NEEDED - Do you have one for sale and would like to get it sold? Just send us an email, we can help you sell it. ARCHIVED details for reference - Please click on the photo above to read more. This UKWMO Underground Nuclear Bunker that we had for sale is NOW SOLD. We have approximately 41,282 readers, several dozen of whom have emailed asking to buy more of these underground bunkers. If you have one for sale, please CLICK ON THE PHOTO ABOVE to read more. Also please consider registering with Unique Property Bulletin for an EMAIL ALERT should we have further UKWMO stations coming up for sale.

Would you like access to our VIP Members' Page? Learn our top ways to find unique property? PLUS we have a section where ADVANCE NOTICE is given of EXTRA SPECIAL UNIQUE PROPERTY COMING UP FOR SALE. To access the VIP page, click on the photo above and consider a modest donation of £3.65. You then have access to the password which unlocks the special VIP PAGE. Unique Property Bulletin is a not-for-profit website run by volunteers, for like minded people - readers like you, who enjoy visiting and/or living in unusual properties. 95% of the main publication is FREE to read, and relies entirely on donations and subscriptions. Please consider helping a little: £3.65 for a year. Plus you get a SPECIAL FEATURE ARTICLE into the bargain as a thank you from us.

News About How Unique Property Bulletin Helps You

Please click the picture above, for news about how Unique Property Bulletin is arranging ways in which it can help you and all of our readers. Forever.

Can You Help Us Find A Unique HQ Office Building Please?

£100 Finders Fee. Please Can You Help? Unique Property Bulletin accidentally sold the headquarter building (Old Engine House at Noss Head Lighthouse Station). We are now looking to buy a replacement unique property 250 miles further south and have a crisp £100 note, as a finder’s fee, payable to any reader who succeeds in helping us locate our new office HQ. We have cash waiting to buy the best candidate building.  Just TEXT your unique property find details to: 0757 2768 795 or please CLICK ON THE £100 PICTURE above for further information. Thanks.

This website is a not-for-profit facility, free for readers. If you have enjoyed the content, please consider donating £5 or £10 for a year. MANY THANKS. To read our DONATION PAGE please CLICK ON THE PHOTO ABOVE. EXTRA UNIQUE PROPERTIES ON FACEBOOK.. Our Facebook account aims to have additional properties every TWO days or so - in between the main and full MONTHLY edition. Please CLICK ON THE PHOTO ABOVE to read more. Please help us by 'liking' and 'sharing' posts that you enjoy. Thanks.

To be notified of new issues as they are published

You have Successfully Subscribed!

FOR RENT: By Toward Lighthouse Clover Cottage - By Toward Lighthouse is currently available for rental. A beautiful, detached place in an idyllic location. Please note the photograph above is of the lighthouse and general compound - Clover Cottage is to the left of the picture. CLICK ON THE PHOTO ABOVE FOR MORE INFORMATION. To be notified of new issues as they are published

You have Successfully Subscribed!

Below here are some sold properties for reference. IF YOU HAVE A UNIQUE PROPERTY TO SELL, PLEASE GET IN TOUCH. Older editions of the Unique Property Bulletin that have been moved off of our main site to the ARCHIVES and can be found by clicking on the BACK COPIES logo box immediately above this text. These back copies represent a RICH SOURCE of unique properties that may return to the sale market someday. Enjoy having a free rummage about this archive

Copyright - 1987 to 2017 Inclusive: Alternative Househunter Guide - 1987-1991 & Unique Property Bulletin - 1992 to 2017: Unless otherwise attributed, all material, including photographs in all Unique Property Bulletin editions are protected by copyright. As such the content within this website may NOT be reproduced without the courtesy of prior written permission of the respective copyright holder. Thank you.

Our aim is to provide readers with a variety of unusual places to buy or rent. This website is free to read. It is run on a not-for-profit basis by volunteers.

To receive email updates each time we publish a new edition, please fill in your details below.

Thank you - your details have been registered and we will be in touch soon!